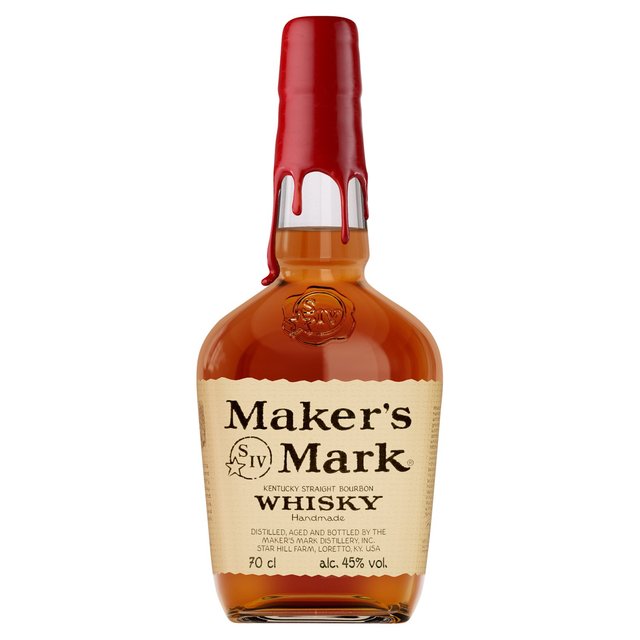 Premium whisky that goes against the grain. Each bottle of Maker's Mark bourbon whisky is hand-dipped in our signature red wax making each one unique. Our receipe uses soft red winter wheat resulting in a lighter tasting, premium bourbon whisky with caramel and vanilla notes that's perfect for mixing, in cocktails such as the Mint Julep and Star Hill Spritz or over ice.

Enjoy neat or over ice. Mixes perfectly with club soda, ginger ale or cola. Try in your favourite bourbon cocktail

Enjoy neat or over ice. Mixes perfectly with club soda, ginger ale or cola. Try in your favourite bourbon cocktail

Maker's and Ginger
1 Take a clean highball
2 Fill it with fresh, solid ice cubes
3 Squeeze in a wedge of lime and drop into the glass
4 Measure in 25ml Maker's Mark
5 Top up with ginger ale, stir and serve
Each Maker's and Ginger contains 1 unit of alcohol.

Maker's Mint Julep
1 Add a bunch of mint leaves and dash of sugar syrup to a rocks glass or silver Julep cup
2 Muddle gently together with bottom of barspoon
3 Half fill cup with crushed ice, add 1 measure Marker's Mark, and chum with bottom of the barspoon
4 Top cup with crushed ice, add second measure Maker's Mark, and chum once again
5 Add final topping of crushed ice, garnish with a generous mint sprig, and serve
Each Maker's Mint Julep contains approximately 2 units of alcohol.

We're proud of our unique and full flavoured handmade bourbon.

Our president, Bill Samuels, Jr., comes from a long line of bourbon makers which started way back in 1780. About 1840, the Samuels family actually started to make a living from distilling and the recipe was passed down six generations and remained unchanged until it got to Bill's father. Bill Samuels, Sr., had his own idea of how a whisky should taste, so he abandoned the family recipe and set out to create his own. If he was going to make a bourbon and put his name on it, he wanted one he could be proud of. And that meant a bourbon that was more pleasing to the palate. So in 1853, he bought an abandoned Victorian distillery (now fully restored and a National Historic Landmark) in picturesque Happy Hollow, Kentucky, and set to work on making his dream a reality. He developed a new recipe based on locally grown grains. The most unique thing he die, however, was replace the traditional bourbon flavouring grain of fry with red winter wheat, which produced a much gentler taste. Once the re

Maker's Mark is one of the only bourbon distilleries that makes just on brand of bourbon. We're pretty easygoing about things, but when it comes to our recipe, that's one thing you'll see us get passionate about. We use pure, iron-free limestone spring water exclusively. Not city, well or river water. Our source is a ten acre limestone spring-fed lake at the distillery. Rather than the traditional Rye, we use yellow corn and red winter wheat from specially selected small-farm cooperatives, all of which are located within the limestone geology near the distillery. This wheat gives our whisky its soft, mellow taste. Our date rollermill is the key to preparing our grain for cooking. While some distillers think this method is too slow and produces a lower yield, it's just fine for us. The slow process does not scorch the grain like a hammermill can. We are among the few remaining bourbon distillers that propagate their own yeast for fermentation with cultures that we can trace back to the

This is my go to bourbon for mixing or drinking straight. Occasionally I want something really special and go for a small batch producer for a treat, but this hits the mark most of the time.

The best balance of smoothness and rich flavour.

This stuff is amazing. Try it in cocktails, mulled drinks and egg nog.

This was suggested to me by a barman as a substitute for JD. In fact, that's like substituting a Rolls Royce for a Mini - Maker's Mark is simply the smoothest, most mellow Bourbon I've ever tasted. Just so, so nice - and dangerously easy to drink.

A smooth sipping bourbon that is still a whisky. Friends introduced us to this and we drink it as often as we dare now. Perfectly smooth. If you haven't tried it before you won't be disappointed!