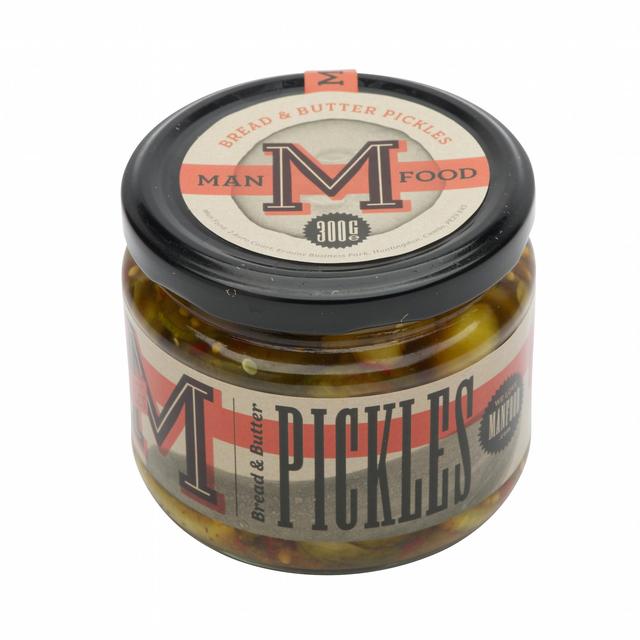 Manfood was developed when Andre Dang and his partner, Jon Honeyball, spotted a gap in the market for a good, crispy, chunky pickle. The pair beat hundreds of applicants to win Ocado's Britain's Next Top Supplier, impressing Michelin-starred chef, Tom Kerridge with their unique flavours and textures.

A recipe inspired by the American deep South, this contains finely sliced cucumbers in a sweet and sour marinade.  The addition of chilli flakes, star anise and cinnamon give it a distinctly Asian inspired twist.

Once opened, keep refrigerated below 5°C, and consume within 6 weeks.

Stir contents to mix, then use as desired.

Awesome flavour. Sweet, sour and mildly spicy. Will be a regular order for me for sandwiches and rolls.

Perfect with barbecued meats, alongside fries and slaw, also with pork pie!

Fantastic product, I first bought it in Harvey Nichols, and was so so delighted to find it even at better price on Ocado. Terrific taste, beautifully spiced, coriander seeds, chilli, truly a beautiful product. Fabulous served with hams or other charcuterie on any antipasti platter!

Wasn't what I expected, it was a bit of a mishmash of lots of things that shouldn't go together with an overpowering flavour of star anise.

Goes with Cheese, but too many seeds

I don't like all the chewy, chunky seeds and peppercorns in this, though the flavour of the pickles themselves is nice with a strong cheddar.

Wasn't really to my taste but my husband loved them, hence the four stars, had them with French bread and cheese, however very pricey.