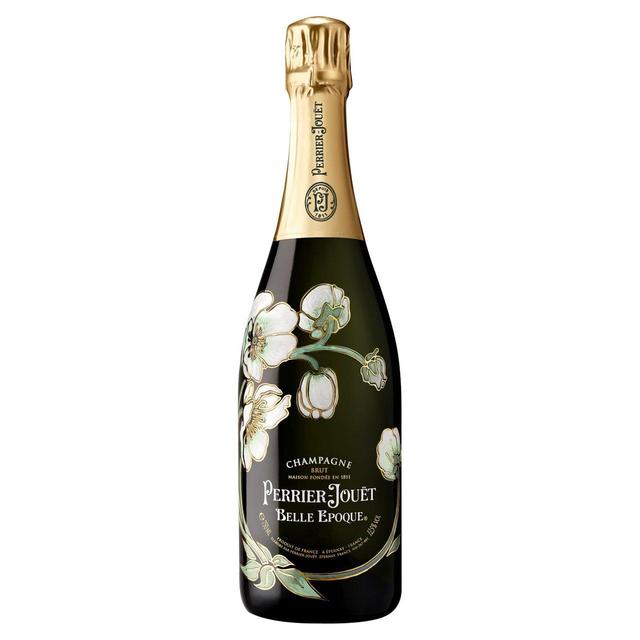 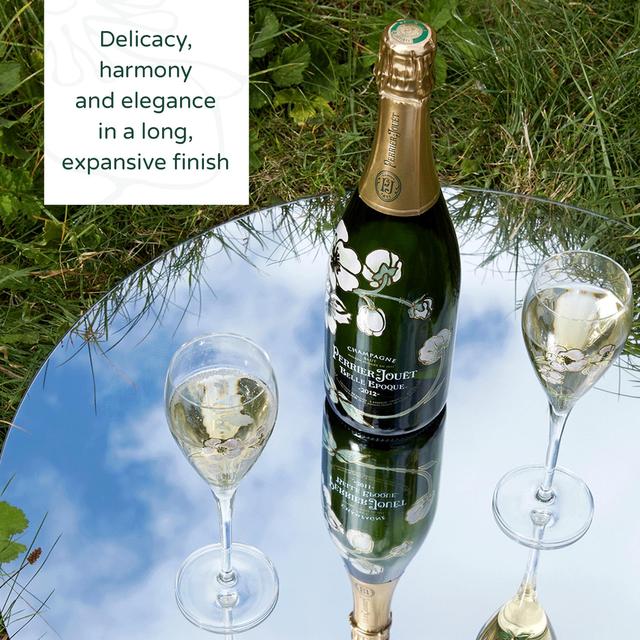 The Belle Epoque Cuvée is the pride of the House of Perrier-Jouët. It is not by chance that many experts consider it among the finest prestige cuvées in the world.

Cuvée Belle Epoque is the perfect aperitif, or during a meal, its freshness and floral scents blend beautifully with the salty flavours of shellfish and fish or light white meat dishes. Sensual and silky, the flavours mingle to leave a long, fine finish.
Fine Champagne, Wine of France

Sparkling wines and Champagne should always be stored in a cool and dry place away from light and heat sources. The ideal temperature for storage is 13-15 degrees C.

Warning: Sparkling wines contain high natural pressure. Do not allow bottles to get warm. Chill bottle before opening and avoid shaking. Point bottle away from others and yourself when removing wire, hood and cork. Hold the cork firmly and twist out slowly by hand. Never in any circumstances use a corkscrew to open.

Perrier-Jouët
Belle Epoque is a marvellous reflection of Perrier-Jouët's matchless expertise. This vintage champagne dominated by the noble Chardonnay grapes from Cramant, has been made from the most prestigious crus in the Champagne region. It is distinguished by its finesse, and its truly outstanding bouquet and fruity flavour. 1998 Vintage. The year was characterised by a lot of rain, particularly during April, June and the beginning of September. Spring was wet and cold. Temperatures dropped to -4°C on 13th and 14th April and frosts affected the Chardonnay crop. Milder temperatures at the beginning of June encouraged quick and even flowering. Rains returned at beginning of July, but the second half of the month was dry, but not sunny. August was a heat wave. It rained from 1st September for 15 days solidly, but the cold prevented grey rot and the sun in late September stabilised maturation until the end of harvest. 1998 Harvest. Picking began on 18th September for Chardonnay and 19th September for Pinot Noir. A good harvest in terms of volume and quality, the sugar-acidity balance comparable with 1992, 1989 and 1985. Ripeness: 9.7% vol, with 7.8g/l acidity and 3.06pH. Grape yield: 12,936 kg/ha (including 2,600 kg/ha for reserve stocks). Grape price: 25 Francs per kg. Key Wine Making Points. The Chardonnay wines from Cramant and Avize showed potential for a classic vintage for Belle Epoque: full-bodied but soft, with floral accents and notes of white, citrus and exotic fruits. Strong contrasts were discernible between early-harvested wines (lighter and fresher) and those made from grapes picked towards the end of the vintage (more mature and substantial). All wines showed good balance between sugar and acid. Reviews. 94/100. "This was an excellent year for Chardonnay and that shines through. The nose has a candied aspect, followed on the palate by savoury tones. It's light and delicate, creamy and elegant, but not yet quite formed. This is due in the UK in March 2006 and needs that time at least to come together. Drink 2006-2025." Charles Metcalfe, Wine International Magazine, December 2005.

A luxury champagne house focused on quality, Perrier-Jouët has family roots reaching back to 1811, some of the finest vineyards in Champagne and a reputation for crafting floral, elegant cuvées of finesse. Behind this stands a line of just seven Cellar Masters who, over two centuries, have upheld the house style. Since its 1902 collaboration with Art Nouveau pioneer Emile Gallé, creator of the anemone design for the house's Belle Epoque prestige cuvée, Perrier-Jouët has commissioned work from established and emerging artists.

65 hectares, ranked at 99.2% on the scale of grands crus, and 5 of the most important wines, without which this exceptional champagne could not exist.

While preserving the House style, Hervé Deschamps blended this cuvée to emphasise the unique character of the vintage. His blend brings out the freshness and elegance of the Chardonnays (50%) from the grands crus of Cramant and Avize. From the Montagne de Reims, the Pinots Noirs (45%) display a generosity and delicate complexity that prolong the Chardonnays' finesse. Finally, the rounded charm of the Pinots Meuniers (5%) from Dizy provides the finishing touch to this beautifully balanced cuvée. Over six years' ageing in Perrier-Jouët's cellars further refine the generosity and sophistication of this great vintage.

5.0
4
0
0
0
0
4
Customers rated this product
100%
Customers would recommend this product
No reviews, yet. Why not be the first?
We use cookies to give you the best experience with Ocado. Continue shopping if you’re happy, or find out how to manage your cookies